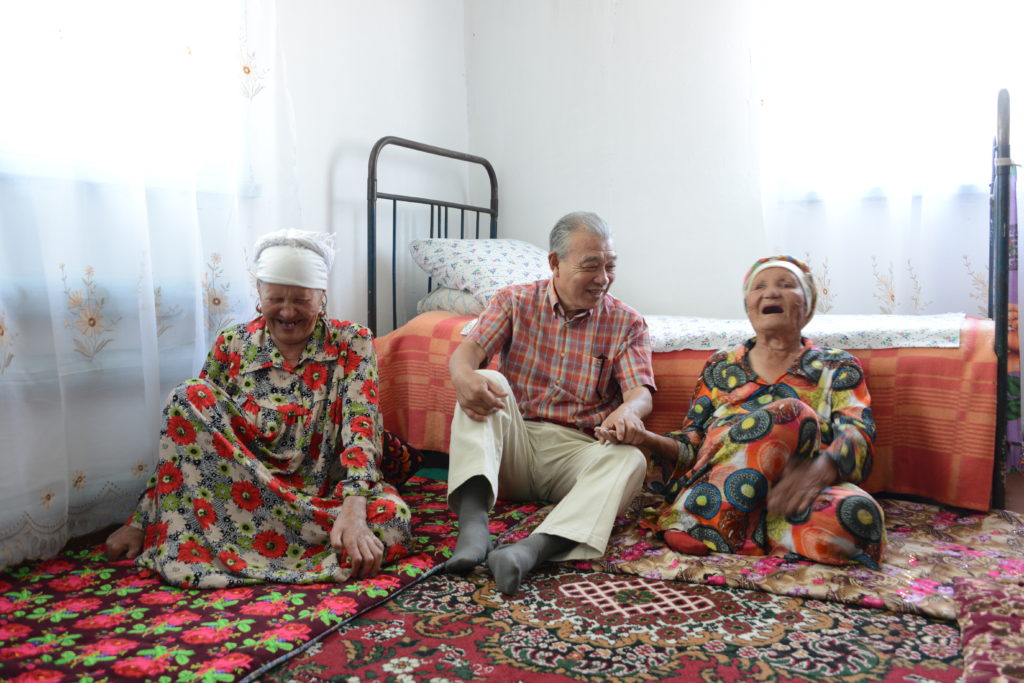 Traveling man: the Goodwill Ambassador shares a joke with two residents of a leprosarium in Krantau, Uzbekistan during a visit in 2013.

I started this newsletter in April 2003 to share information about the fight against leprosy. This marks the 100th issue. Over the years I have reported my views on leprosy elimination and activities taking place around the world. As I write, we are in the grip of the COVID-19 pandemic. I commend the tireless efforts of medical personnel and hope the outbreak will be contained as quickly as possible.

As Goodwill Ambassador I have visited some 100 countries and attach particular importance to three points: 1) going to see the situation for myself, listening directly to what people have to say and clarifying what the issues are; 2) making use of newspapers, TV, radio, social and other media to communicate correct information about the disease to people around the world; and 3) meeting with presidents and prime ministers to persuade them to actively tackle leprosy.

My motto is “knowledge and practice go together.” While I respect the insights and information contained in reports, I believe there is no substitute for checking the situation in the field with my own eyes as this represents a more direct route to finding real solutions. Therefore, I have made a point of traveling to remote areas where experts have not been in the belief that my words will be more persuasive and catch people’s attention. 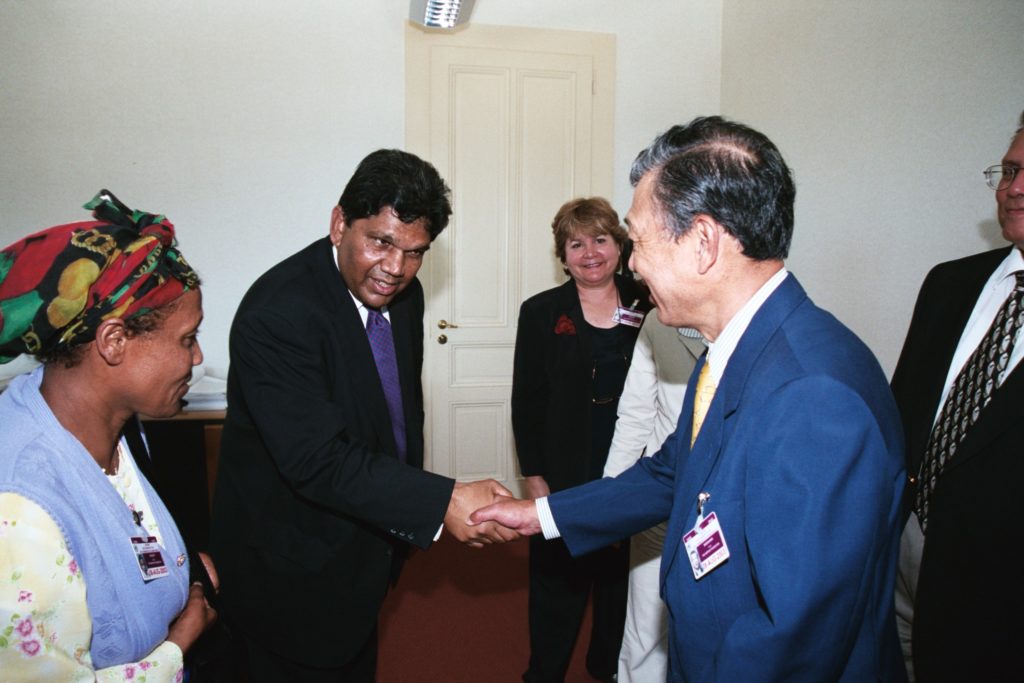 Yohei Sasakawa visits Office of UN High Commissioner for Human Rights in 2003 to raise leprosy as human rights issue, the start of repeated visits to Geneva.

In my lifetime I have met with 458 current and former presidents and prime ministers to explain about leprosy and request their cooperation. That number runs into thousands if I add ministers, deputy ministers and governors. Compared to diseases such as malaria, tuberculosis or HIV/AIDS, there are far fewer cases of leprosy. Unless you regularly engage with the person at the top, chances are the budget for the leprosy program will be cut.

What has left a lasting impression on me are my encounters with persons affected by leprosy who have found the strength to overcome the challenges they face. All over the world I have met individuals existing in unimaginably desperate circumstances, abandoned by their families and living on their own for many years. For some, there has been no other recourse but to begging to survive.

But in India, Indonesia, Brazil, Ethiopia and many other countries, persons affected by leprosy are making their voices heard and becoming increasingly organized. What they have to say carries more weight and is more persuasive than if I were to make 1,000 speeches. The role they have to play in advancing our efforts against the disease is particularly important. 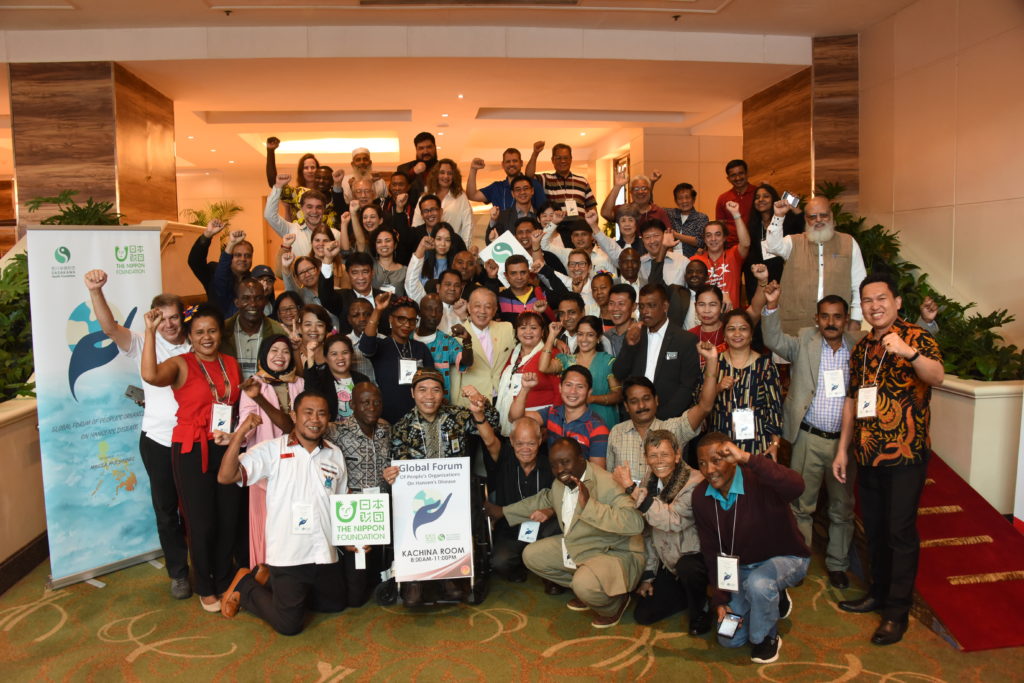 Global Forum of People’s Organizations on Hansen’s Disease, Manila, Philippines in 2019. Participants underscore that Hansen’s disease is not just a health issue but at an issue of human rights.

As Goodwill Ambassador for Leprosy Elimination, I have worked with governments over the years to achieve the numerical target that was set by the WHO of eliminating leprosy as a public health problem, where elimination was defined as a prevalence rate of less than one case per 10,000 population. But achieving ‘elimination’ did not equate to no more leprosy. Elimination was a milestone.

In recent years, “Zero Leprosy” has been put forward as the goal. Many people have asked me if this is possible. My answer is that it doesn’t matter where the goal is; what is important is to keep heading toward it. No matter how long the tunnel, if you keep going you will eventually see the light at the end. Everyone just needs to continue their efforts.

My dream is for an inclusive society in which not only persons affected by leprosy but also persons with disabilities, minorities and other vulnerable groups suffering from social discrimination all have a place.

Hence this journey I am embarked on will continue. I do not know if the goal of zero leprosy and zero discrimination will be achieved in my lifetime, but I believe it will be realized one day and so I will continue to do my best to help us get there.

(This is an extended version of the Goodwill Ambassador’s Message appearing in the print edition of Issue #100 of the newsletter.)

IN THIS ISSUE
Message:
My Journey Continues
Special Interview I:
Our Goal Is Not Yet in Sight, Yohei Sasakawa, Goodwill Ambassador
Timeline:
Reviewing developments in leprosy over the course of 100 issues of the newsletter
Special Interview II:
Encouraging Signs, Alice Cruz, UN Special Rapporteur on leprosy
News:
Leprosy and COVID-19
From the Editor