TOKYO/BRUSSELS, January 28, 2021 – The 16th Global Appeal to End Stigma and Discrimination against Persons Affected by Leprosy will be launched in an online ceremony on January 31, 2021, World Leprosy Day. 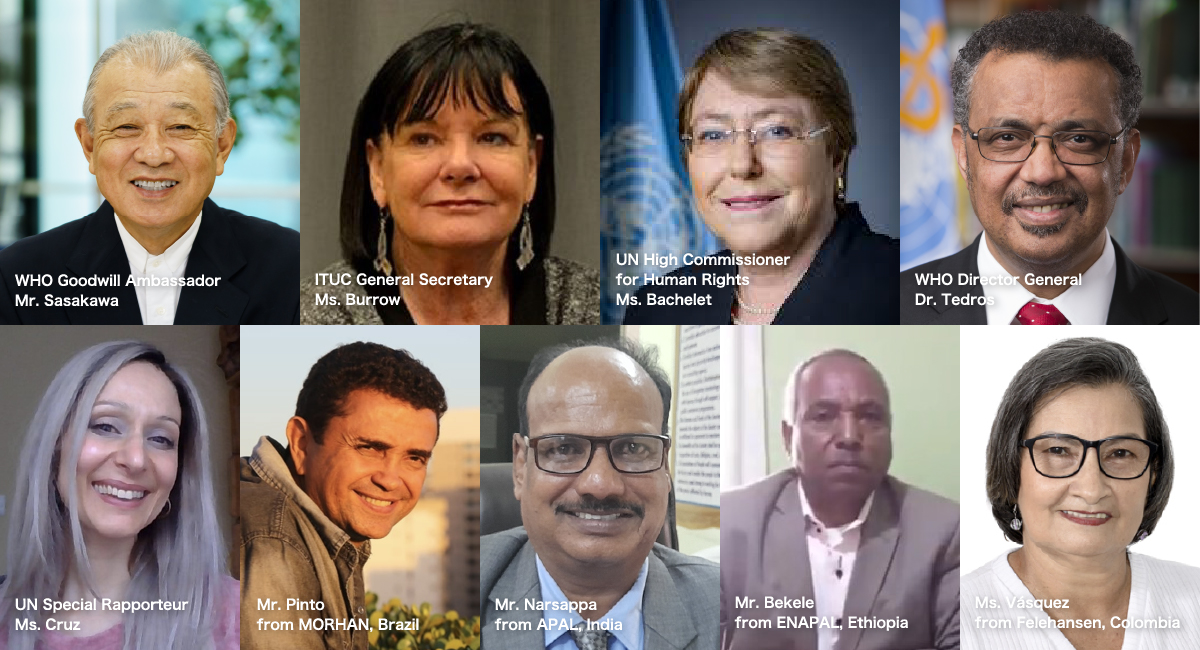 Organized by Sasakawa Leprosy (Hansen’s Disease) Initiative, this year’s appeal is endorsed by the International Trade Union Confederation (ITUC) and focuses on the right to work.

Representing the ITUC, which promotes and defends the rights of workers worldwide, will be General Secretary Sharan Burrow, who says in a video message that the continued existence of leprosy “points to the vulnerability of our health systems, the underfunding, the lack of attention to diseases that overwhelmingly affect the poor more than the rich.”

Among others who have recorded messages of support are WHO Director-General Dr. Tedros Adhanom Ghebreyesus, UN High Commissioner for Human Rights Michelle Bachelet, the UN Special Rapporteur on leprosy and persons affected by leprosy from Brazil, Colombia, Ethiopia and India.

While leprosy is completely curable, prejudice and discrimination based on outdated notions of the disease linger and can result in marginalization and loss of livelihood.

“People affected by Hansen’s disease still suffer heavy social stigma in Brazil, perpetuating the cycle of poverty and misery, because those people are not given work opportunities,” says Faustino Pinto, the national vice-coordinator of Brazil’s Movement for the Reintegration of People Affected by Hansen’s Disease.

“We are having difficulties in getting jobs or being treated unfairly in the workplaces,” says Vagavathali Narsappa, chairman of India’s Association of People Affected by Leprosy. “For some cases, it is because of deformity caused by leprosy, but for other cases, people are denied just because they or their family once had leprosy, even though they are cured and capable.”

International labor standards uphold the elimination of discrimination in respect of employment and occupation, and through Global Appeal 2021 ITUC underlines “the right of every individual seeking work to be treated with dignity, fairness and respect.”

“The denial of the right to work is one of the most serious issues facing persons affected by leprosy,” Sasakawa says in a recorded video message. “A diagnosis of leprosy can mean loss of livelihood, but a cure is no guarantee that making a living will be possible – even for someone who is able and willing to work. So, I am hopeful that by launching Global Appeal 2021 with ITUC’s support, we will draw attention to this issue and, by doing so, help protect the rights of workers affected by leprosy.”

As the International Trade Union Confederation, our mission is to promote and defend the rights and interests of all working people.

Although leprosy is completely curable, prejudice and discrimination based on old perceptions linger.

The stigma of leprosy can result in ostracism and job loss.

Even family members of a person affected by leprosy may find doors closed to them, despite being eager and willing to work.

International labor standards uphold the elimination of discrimination in respect of employment and occupation.

ITUC supports the efforts of persons affected by leprosy who want to earn a living.

We believe in equality and non-discrimination.

We uphold the right of every individual seeking work to be treated with dignity, fairness and respect.

SHF, DPI submit written statement to Committee on Rights of Persons with Disabilities on right to work