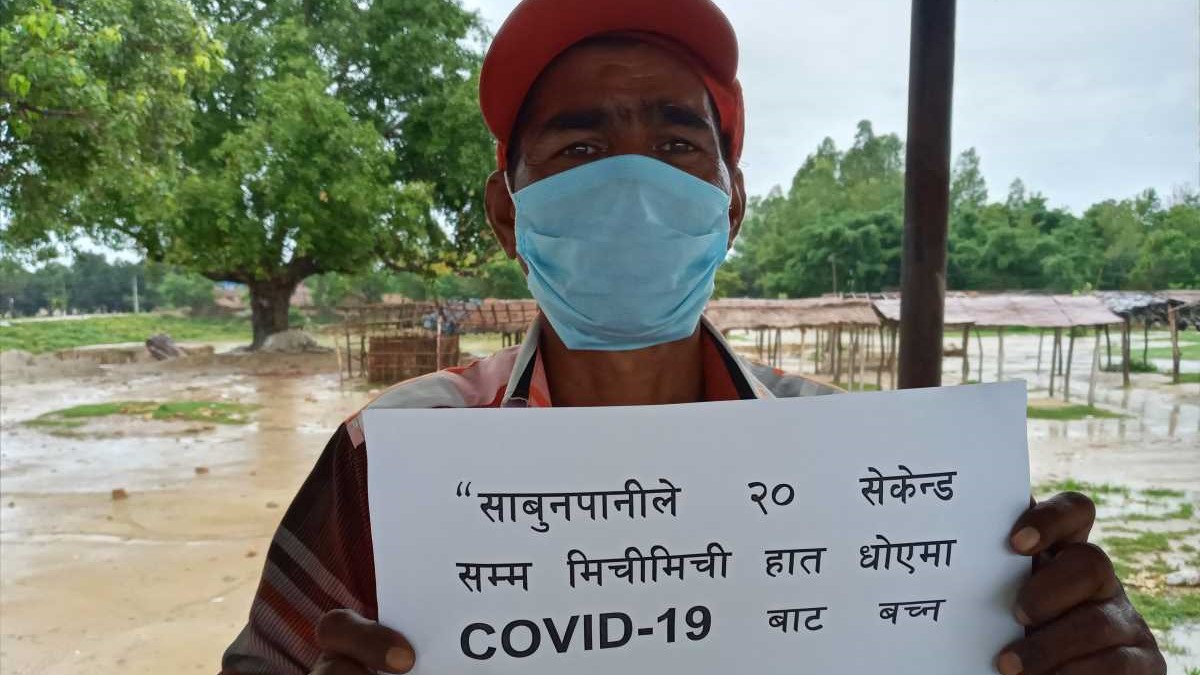 Raising awareness in Nepal: Kishori Nadav, facilitator of the Yagyabhumi Self-Help Group (SHG) in Danusha district, with advice to “protect yourself and others from COVID-19”.

The COVID-19 pandemic and measures to prevent the spread of the novel coronavirus are having a disproportionate impact on the most vulnerable members of society, among them persons affected by leprosy and their families.

Initiatives are taking place around the world to help communities of persons affected to stay safe, receive daily necessities and have access to needed healthcare.

Among these, Sasakawa Health Foundation (SHF) has been funding projects in Indonesia, Nepal and Bangladesh to provide comprehensive support through a three-pronged approach in which organizations of persons affected play a key role, supported by a trusted partner on the ground. 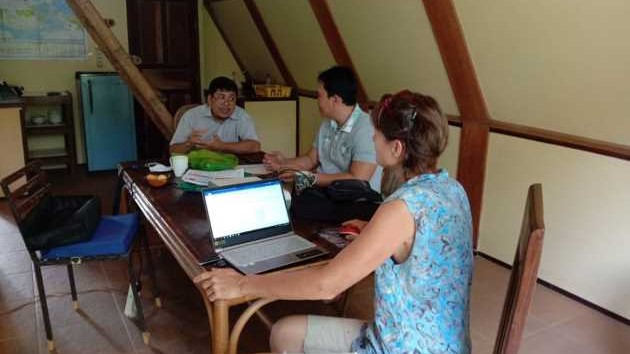 Before launching the projects, SHF liaised with key stakeholders including the Global Partnership for Zero Leprosy (GPZL), the International Federation of Anti-Leprosy Associations (ILEP), organizations of persons affected by leprosy, the UN Special Rapporteur on leprosy and regular recipients of SHF funding to assess the situation in each country.

SHF concluded that “ownership” of projects by people’s organizations should be part of the equation.

What these preliminary investigations found was that communities of persons affected are facing many challenges, including loss of livelihoods, curtailed access to health services, and the risk of further stigmatization because of COVID-19.

In keeping with its commitment to the empowerment of people’s organizations, SHF concluded that support should go beyond the provision of supplies and that participation in and “ownership” of the projects by persons affected by leprosy should be part of the equation. 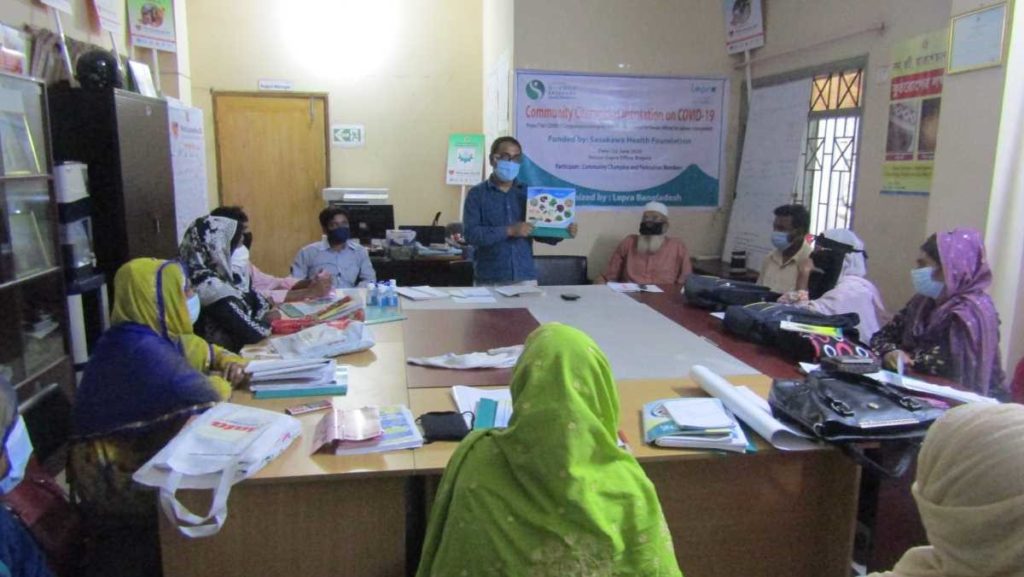 Community Champions from 12 sub-districts attend an orientation on COVID-19 at the Lepra Bangladesh office in Bogura district, Bangladesh.

This resulted in an approach consisting of: 1) responding to the direct needs of the community through providing food, medicine and other relief supplies, and offering guidance on COVID-19 as well as information on self-care for leprosy; 2) advocacy to ensure people have access to existing government schemes and to ask the authorities to consider additional measures; and 3) disseminating information to communicate details of activities and outcomes via SNS and use this information to help raise funds via crowdfunding.

Projects were chosen based on the prevalence of COVID-19 in the area, while the people’s organizations were selected according to the following criteria: active membership, young members included among their leaders, experience relevant to the project (e.g. of distributing supplies to designated beneficiaries in a fair manner), and the existence of external support to assist with activities that may be difficult for them to handle, such as grant management and communicating in English with SHF.

The projects are in operation between the middle of May and the end of August, depending on the country.

Indonesia has reported cases of COVID-19 in all 34 provinces. South Sulawesi, a leprosy-endemic province in the middle of the country, has seen a high number of novel coronavirus infections. 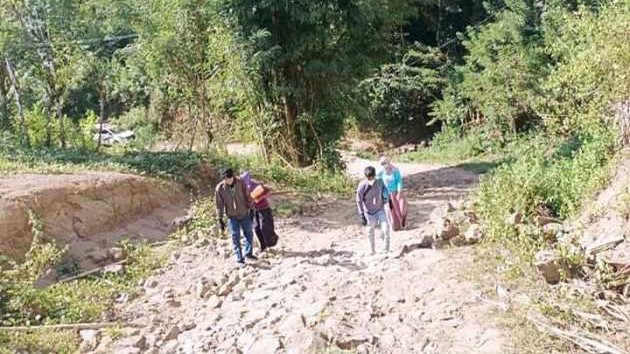 A team from PerMaTa climbs a steep and muddy road to reach out to people in need.

PerMaTa members in the districts received training from PerMaTa/DTI at the provincial level, before carrying out door-to-door visits to deliver leaflets on COVID-19, soap and masks, and dispense advice. Among the target population, 600 persons identified by the teams as being in the most difficult economic circumstances are receiving food purchased and distributed once a month. 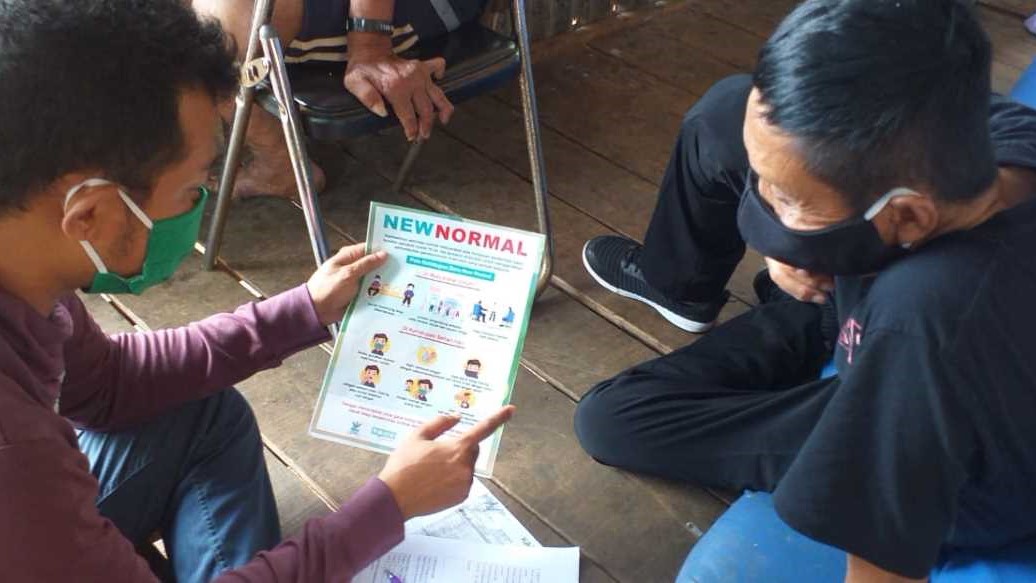 Members carry out door-to-door visits to deliver leaflets on COVID-19, soap and masks, and dispense advice.

Regular visits have been made to provincial district and village offices to share information on the status of persons affected by leprosy. Information on those who have not received government assistance is reported so that, for example, ID cards can be issued and they can be added to the list of beneficiaries.

When a suspected case of COVID-19 is found during house visits, the authorities are notified and cases are followed up to make sure that appropriate treatment and support are being given.

Rain, muddy roads and steep inclines have made this project a challenge at times, and not everyone can be reached because they have moved, died, or their address is unclear. In one instance, the team had to climb a mountain to reach a man who was too ashamed to live in his village because he had leprosy. 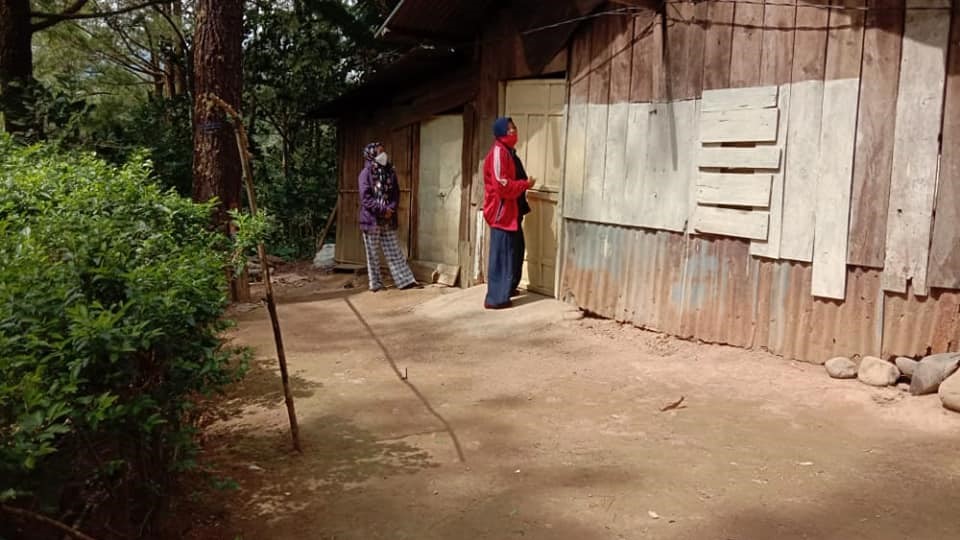 After a long and tiring journey, some visits end in frustration as there is no one at home or the occupant has moved away.

Visits were in most cases warmly welcomed; nearly all recipients have been grateful—even inviting the team in for food and drink. A few were unhappy because they didn’t want to be identified as having had leprosy. In some cases, it became apparent that health workers—fearful for their own safety—had previously concealed a diagnosis of leprosy from a patient.

In addition to passing on information about COVID-19 and food aid, the visits have also led to the discovery of individuals in need of treatment for leprosy and its consequences—and team members have been able, amongst others, to assist in the process of helping children return to school after they were treated for the disease, and in obtaining national health insurance and medical treatment for impairments. 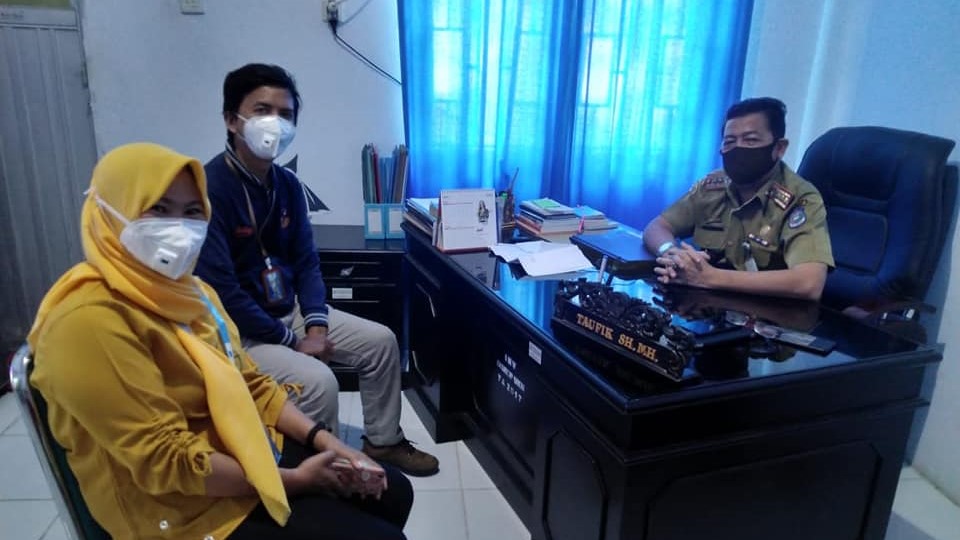 PerMaTa members in Bulukumba district attend a meeting at the Bulukumba Cooperative and UKM (small and medium enterprise) Office.

“We have been doing home visits before, but we didn’t realize there are so many people affected by leprosy that need support,” PerMaTa reports. “Although this was a COVID-19 project, we found more people facing hardship due to leprosy.”

“Of course, we were afraid of catching COVID-19, visiting so many homes, but we tried to stick to the safety protocols by PerMaTa/DTI as best as possible and thus felt safe.”

“We think our visits really were useful. Most people were very happy about the attention and, in some cases, we were successful in getting them the help they needed…Hopefully, we can continue this kind of work in the future because there are so many other areas and districts.”

Nepal implemented a nationwide lockdown of cities from March to mid-June, disrupting the lives of citizens. The lockdown had a particularly severe impact on persons affected by leprosy , an economically vulnerable group who also face stigma and discrimination.  With the measures introduced against the coronavirus, they struggled to eat as their jobs as day-laborers dried up. 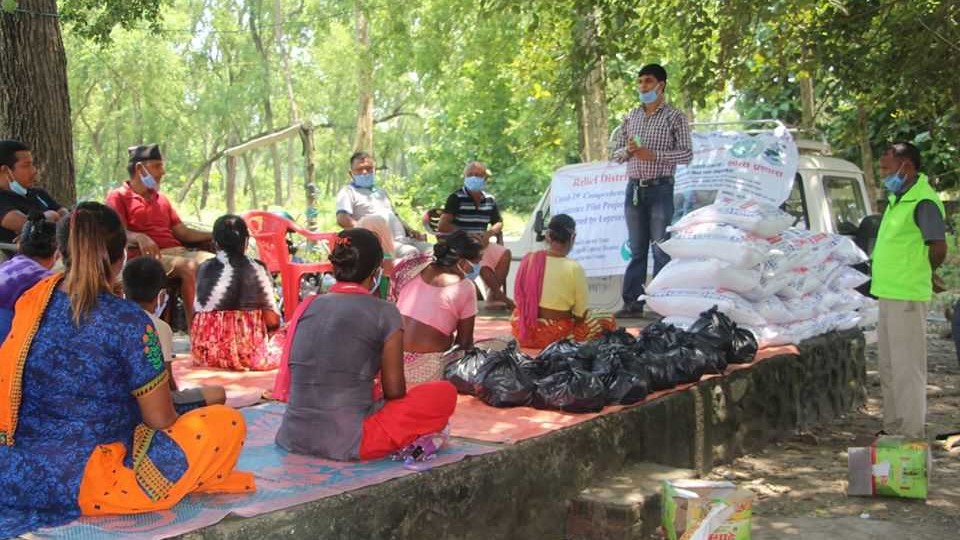 Ramesh Kumar Choudhary, manager of Community Health and Development at Nepal Leprosy Trust (NLT), shares information with a group in Lalbandi Municipality on COVID-19, leprosy and their rights.

The Nepal Leprosy Trust operates a major leprosy services center in the Terai region bordering India and runs programs to promote the social and economic empowerment of persons affected by leprosy. Lalgadh Leprosy Hospital and Services Center (LLHSC) in Danusha district supports 112 self-help groups (SHGs), which have been divided into four large groups that have been registered as NGOs. For this project, the beneficiaries are members of the SHGs, who have also been called on to play an active role in planning, mobilization and implementation of the project.

SHG members have been delivering food packages and sanitation kits consisting of rice, beans, cooking oil, soap and masks to beneficiaries. They have also been providing information on how to take precautions against COVID-19. A ward chairman in one of the areas where the project has been taking place was very appreciative of the local SHG’s intervention and donated 5,000 Nepal rupees (about US$40) to their efforts. 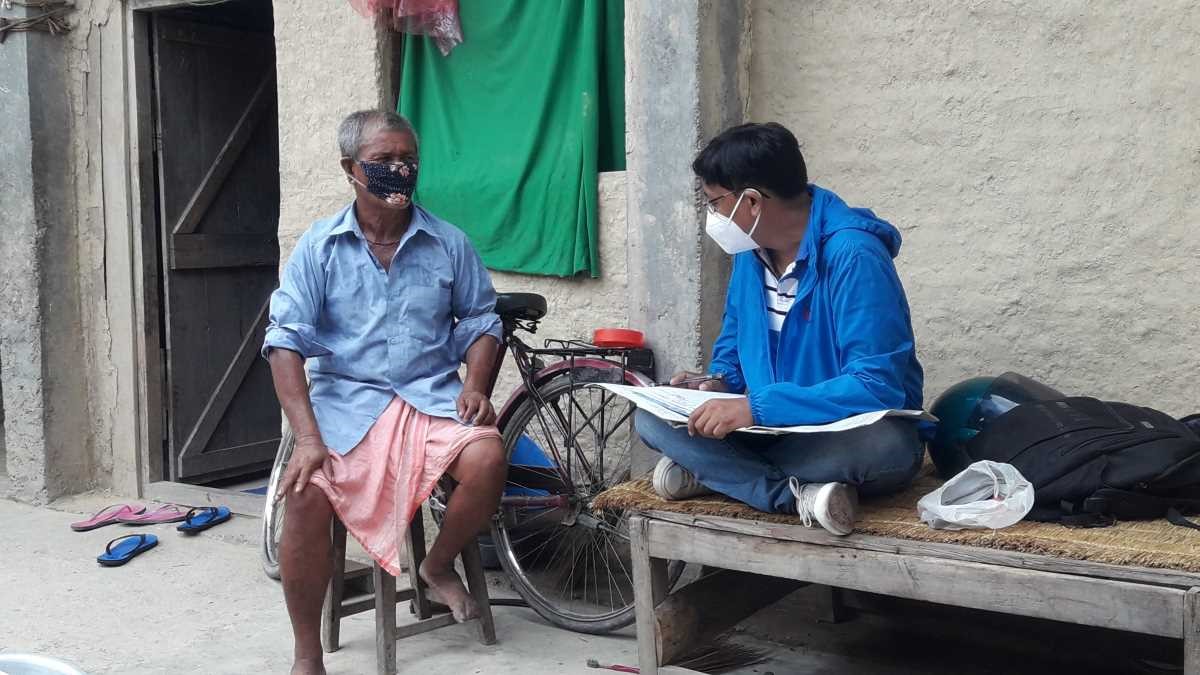 Nepal is currently in the midst of the rainy season and the Terai region where the pilot project is taking place has seen flooding. This has made deliveries difficult, but activities have not been interrupted and SHG members have continued to receive support.

As part of advocacy activities, rallies have been held and petitions have been handed to the authorities appealing for the provision of emergency relief supplies to persons affected by leprosy and also asking for free health insurance. One such petition was organized by Sita, the facilitator of the Bengadawor SHG in Danusha district. Impressed at her initiative, the local ward chairperson requested her to arrange relief support for 20 vulnerable families, “making her feel more valuable.” 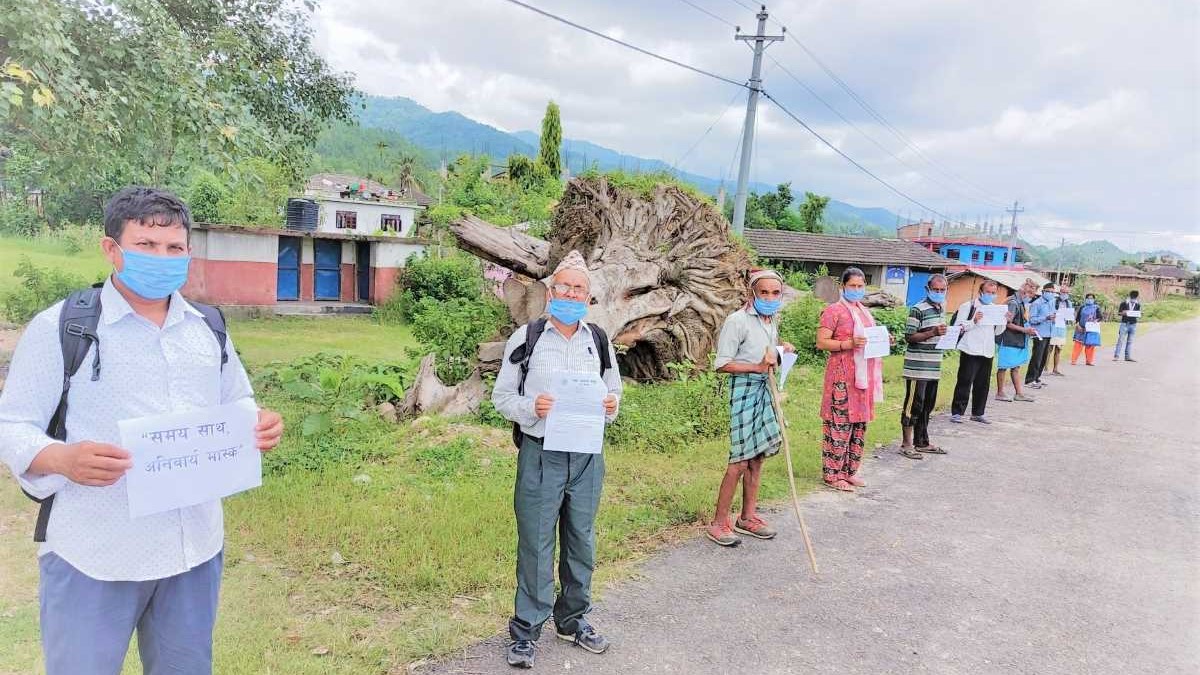 Members of Hatpate village development committee in Sindhuli district prepare to take part in a rally and deliver a petition to the authorities.

To spread awareness about COVID-19 prevention, radio jingles are streamed 32 times a day in the Nepali and Maithili languages.

Because of the terms of the project, relief packages could only be distributed to self-help members. This led to feelings of guilt on the part of some members, who felt there were others in the community who were more in need than they were. One of the lessons learned, therefore, was that future projects should build in additional support for others, as the situation is critical for everyone, not just members of SHGs.

Coronavirus infections have been escalating in Bangladesh, with many areas affected. For the emergency assistance project, four districts of Rajshahi division, a leprosy-endemic area in the west-central part of the country, were selected. 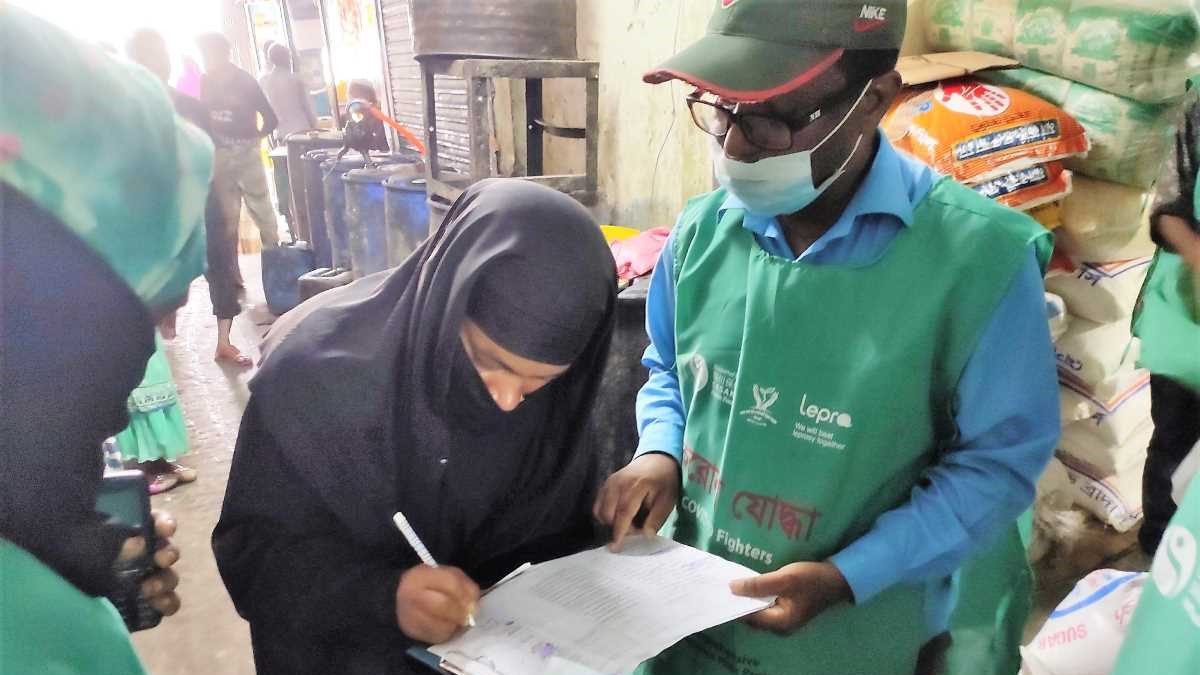 Food being distributed in Shahajadpur, Sirajgonj district, one of four districts in Bangladesh’s Rajshahi division where a project to support persons affected by leprosy has been taking place.

The beneficiaries were some 5,000 persons affected by leprosy living in Bogura, Sirajgonj, Natore and Pabna districts. The project has been implemented by four community-based federations of self-help groups, once in each district, together with Lepra.

The project has utilized “Community Champions”—people who have been trained by Lepra to recognize signs of leprosy. Along with federation members, they have received orientation on COVID-19. In addition, groups of “Corona Fighters” have been formed.

Information leaflets on COVID-19 prepared by the government have been delivered to between 1,000 and 1,400 people per district in the four selected districts, along with masks and disinfectant. These door-to-door visits also served the purpose of data collection, enabling databases to be updated and beneficiaries of relief supplies to be confirmed. 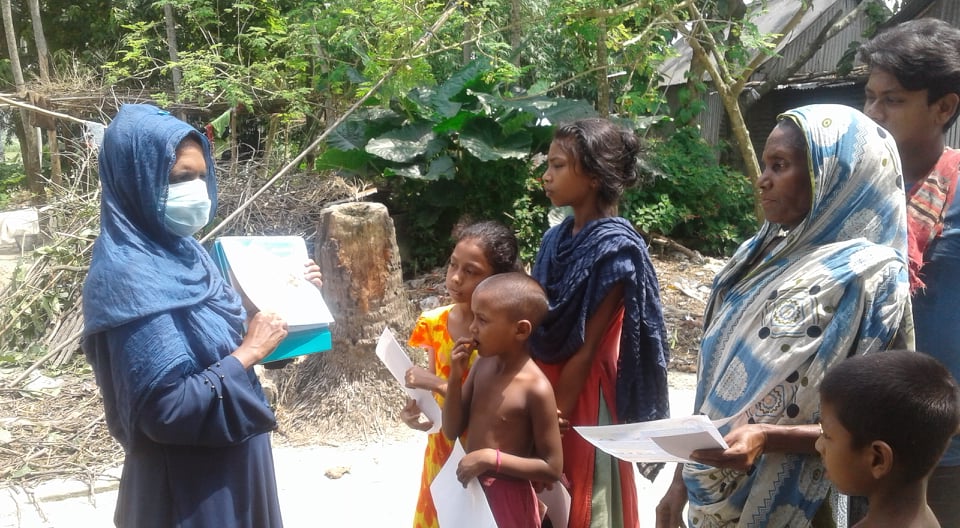 A Community Champion visits a household to disseminate information about COVID-19 and to check on their eligibility to receive food support.

“We think we have an umbrella over our heads,” said one grateful beneficiary.

Meetings have been held between district officials and representatives of people’s organizations and these have created an opportunity to discuss community problems and needs. Officials from the Social Welfare Department have also been present and showed an interest in including more persons affected by leprosy with disabilities in the government’s social safety net program. But they also requested that support be provided to more people and for a longer duration due to the impact of COVID-19 and flooding. 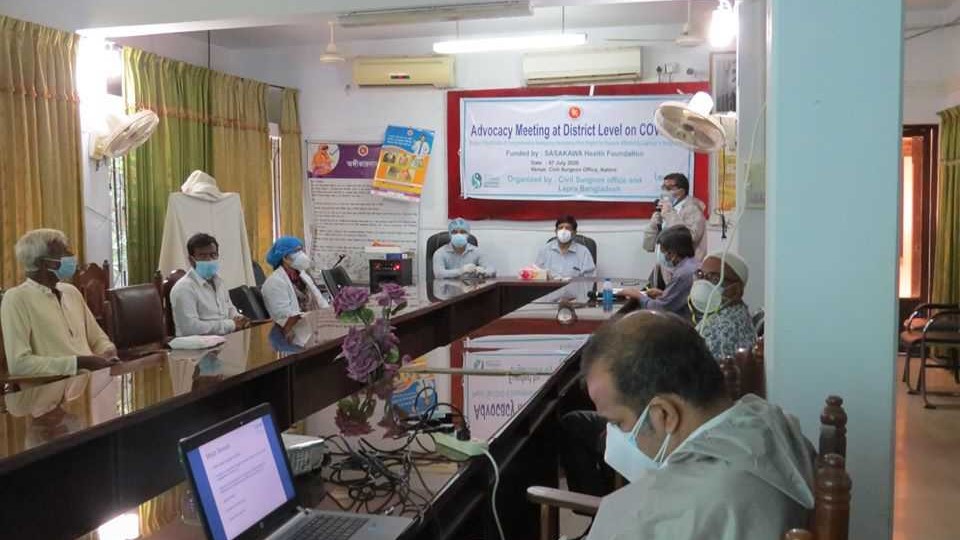 Meetings between district officials and representatives of people’s organizations have created opportunities to discuss community needs.

Further, while the project has been welcomed for the assistance provided to a vulnerable population, there has on occasion been political pressure to support others in the community, not just persons affected by leprosy.

Beneficiaries have been grateful. “We think we have an umbrella over our heads,” one man said. Another recipient, as she contemplated the approach of the important Muslim celebration marking the end of the holy month of Ramadan, expressed her thanks thus: “The Eid festival will be much more special.” 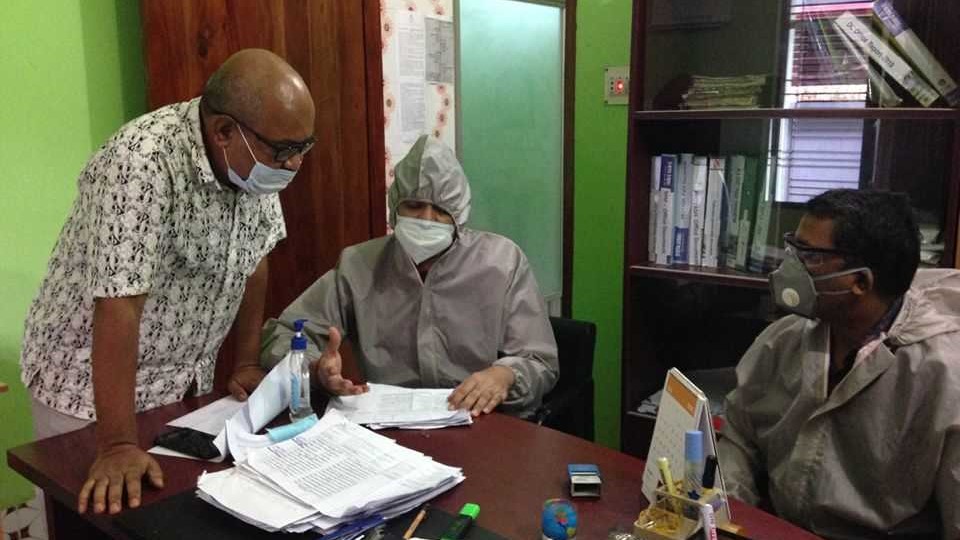 Verifying a list of beneficiaries at the Lepra Bangladesh office in Sirajgonj district.

By enabling the federations of persons affected by leprosy to identify those in the community who are most in need and distribute relief supplies to them, the project motivated them to work hard and get the job done. “We have learned how to implement a project within a short period,” one said. “We feel peace in our hearts.”