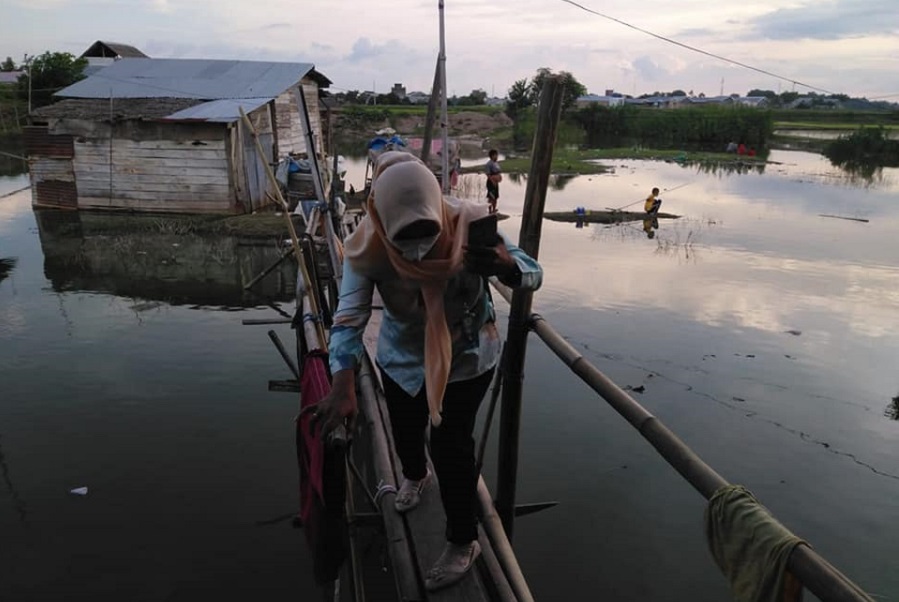 Located almost in the middle of Indonesia, South Sulawesi is a province of natural beauty and diverse culture. The provincial capital Makassar was once a hub of East-West trade and continues to develop as one of eastern Indonesia’s main cities.

Indonesia achieved the goal of eliminating leprosy as a public health problem at the national level in 2000, reducing prevalence of the disease to below 1 case per 10,000 population. It is now striving to attain this goal at provincial level too. Eight of the country’s 34 provinces have yet to do so, among them South Sulawesi. Moreover, because stigma and discrimination against persons affected by leprosy persists, social interventions are needed as well as medical efforts against the disease.

Since South Sulawesi is one of the areas of the country to have seen many coronavirus infections, various restrictions are in place, including limits on movement, that are affecting daily life.

The South Sulawesi branch of PerMaTa, an organization of persons affected by leprosy operating in 3 provinces of Indonesia, plays a central role in addressing leprosy issues in the province. Since it was established in 2007, PerMaTa has expanded its activities in South Sulawesi to 12 districts as it seeks to end stigma and discrimination and improve the lives of persons affected by the disease. Its activities are supported by Dare This Indonesia (DTI), an NPO operating in South Sulawesi that works to help the socially vulnerable. DTI is headquartered in the Netherlands and collaborates with the Dare This cooperative to address issues such as disability, accessibility and environmental protection.

Amid restrictions and fear of infection due to the spread of the coronavirus, PerMaTa’s members have been active in five districts where support needs are high.

The Project So Far

PerMaTa’s provincial leaders, together with its leaders and members in the five districts, decided to start making door-to-door visits, believing that it was important to find out the situation of persons affected by leprosy during the coronavirus pandemic, while at the same time taking precautions not to get infected themselves. They took with them leaflets about the coronavirus, masks and soap to distribute.

What they found was that while many people had heard about the coronavirus on TV, they didn’t know what measures they should take to prevent infection. PerMaTa’s members carefully explained to them what the “new normal” involved and what they should do to stay safe. The visits were usually warmly received and sometimes people would reach out to shake hands—as in pre-coronavirus times—causing concern over the possibility of infection.

After face masks ran out in South Sulawesi, PerMaTa decided to prepare 3,000 handmade masks. One of the members had the idea of asking persons affected by leprosy and persons with disability with sewing skills to make them, seeing it as an opportunity for them to earn some income at a time when the pandemic has badly affected the economy.

From the door-to-door visits, PerMaTa came to know several more things. Emergency support from the government over the novel coronavirus is not reaching everyone, and some people don’t have the necessary ID cards to get public assistance. In response, PerMaTa members in each district explained the situation to the district and village authorities, and actively encouraged them to respond appropriately. In a number of instances, this resulted in public assistance being forthcoming.

These door-to-door visits also posed a new challenge for PerMaTa’s members, which was to visit the homes of persons affected by leprosy who were not on their existing lists. Following negotiations with the government in each district, they were able to obtain lists of leprosy patients from local health centers.

They started to visit people based on these lists, but sometimes couldn’t call on them as planned because of floods or landslides. Some of these visits involved traveling far from urban areas into the mountains, up steep trails that were difficult for those with foot impairments. One person affected by leprosy lived near the top of a mountain and was surprised but delighted to receive visitors. “Once I found out I had leprosy, I moved to a place where I wouldn’t be seen,” he told them. His comments underlined to PerMaTa that stigma and discrimination remain deep-rooted.

In some cases, PerMaTa members had a hard time tracking down people who had given their local health center only part of their address, or a false name and address, because they didn’t want those around them to know they had leprosy.

Now the members are making a second round of visits to people they have identified as being in urgent need of assistance in order to deliver rice and other food items. PerMaTa’s dedicated members continue to cross fields and climb mountains!

Project updates are also being posted on facebook of PerMaTa South Sulawesi and DTI.

For more information about how we support COIVD-19 aid projects, click here.

Sasakawa Leprosy (Hansen's Disease) Initiative, MoHFW & WHO Strengthen the Fight against Leprosy with Joint Launch of ‘Flipchart’, a user-friendly training material for ASHAs;